Parallel processes to support resilience were occurring – attending to the human system underpinning the site, and attending to the meadow’s health. After witnessing the meadow burn out during the six or so weeks of irrigation shutdown, and with the community forums underway, attention shifted to tending to the soil.  One way of using on-site resources and embracing another permaculture principle – the problem is the solution –  was to create (mini) swales.

A major challenge with this garden is the mounded structure, one of many present throughout the nature reserve where remains of the church lie beneath the soil.  The slope makes water and nutrients run down to the lowest point.

A swale is a ditch that runs along the contour of the land – meaning that it is at the same level across its length.  Because the bottom of the swale is level, the water stays in place as if in a giant cup, and is slowly absorbed into the surrounding soil as needed.  Often, just beneath the swale, the soil removed is mounded up to form a ‘berm’.

In large scale settings, this is often planted with trees and shrubs to hold the soil in place, but in smaller scale settings, deep-rooted perennial plants do the same.  A swale can help reduce runoff and erosion, supporting hydration and fertility, therefore using the problem – the sloping land – to create a solution.

In dry climates, the swale is generally planted because moist soil is in short supply, but in temperate, wetter climates, the berm is planted and the swale is filled with woodchip or stone. The swale can also just be left unfilled for water to collect in, forming a small channel, or planted with grasses or other appropriate plants for the area and climate.

A major impediment to actualising this at the nature reserve was getting woodchip and, ideally, leaf mould, to fill the swales with. Weeks of trying to contact various council parks etc services went by to no avail.  In the end, a facebook post of a nearby edible schoolyard project getting woodchip led us to an arborist, who was elated to have a place that could use large amounts of woodchip.

This was all very serendipitous as I rarely use facebook, and in fact only went on to ask other gardening projects for help with sourcing these things.  Leaf mould was also soon sorted when Hari, one of the site caretakers, popped by Victoria Park‘s leaf collection area to chat with the park’s Green Team, who kindly let us arrange a pickup, and in a few months they’ll drop off some of their latest leaf mould to the nature reserve.  Leaf mould – what becomes of leaf piles after a year through the slow action of fungus –  has a substance called lignin, which helps balanced flow of minerals and nutrients within the soil, as well as some other nutrients, so it will be really valuable for the garden.

Julie helping to load up leaf mould at Victoria Park 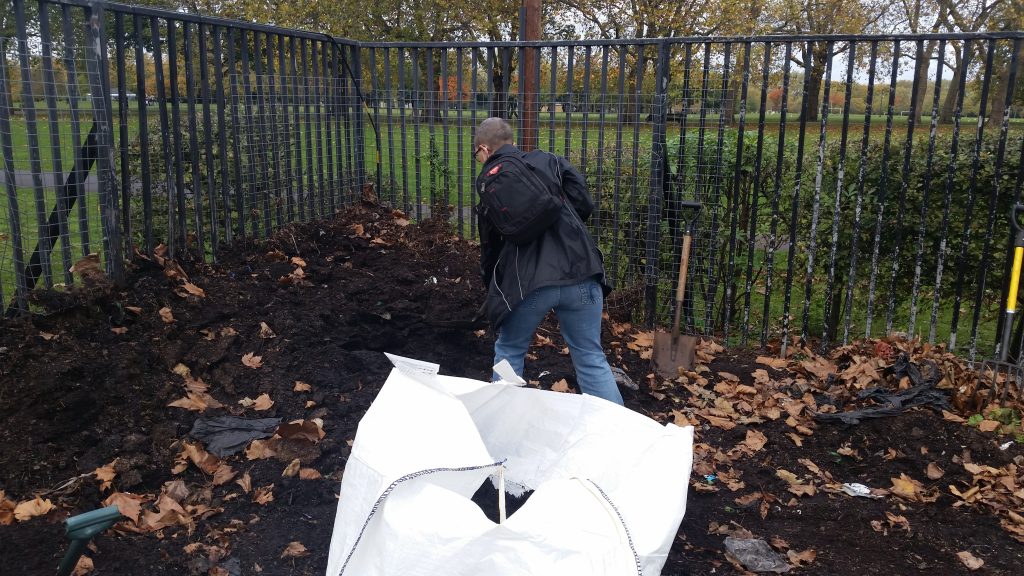 Ji pondering how to haul the ton bags across the Green Team’s yard to the pick up point! 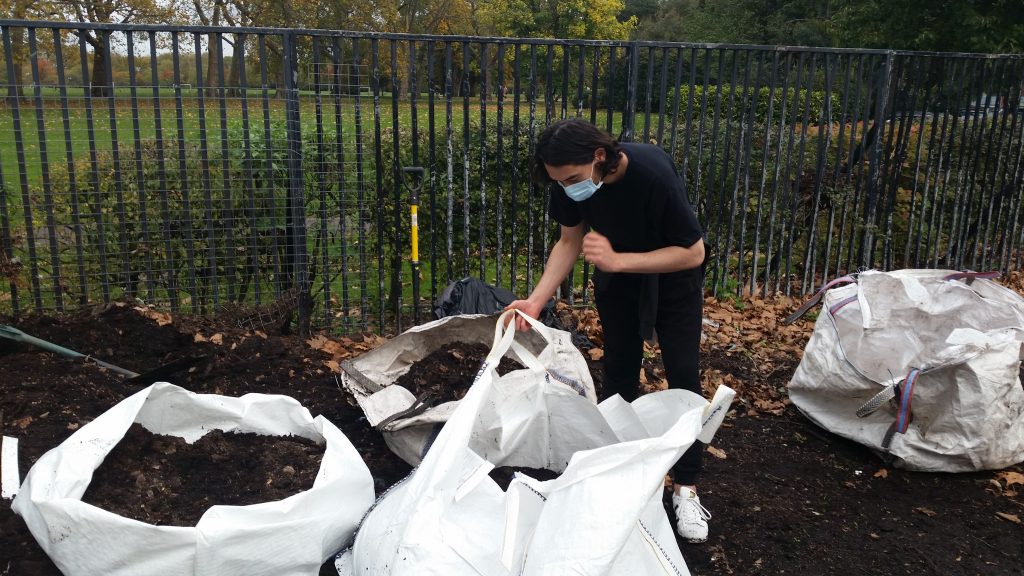 The networking and collaboration exemplifies another permaculture focus – cultivating beneficial connections  – as well as two other principles: produce no waste and integrate don’t segregate.  Relationship building is, at an emotional level, an anodyne to despair, and at a practical level, reduces waste by facilitating the flow of things and skills to where they can be used.  (As a side note – Bethnal Green Nature Reserve and Phytology exemplify this really well through the various functions, activities, and interconnectedness occurring – too many to enumerate here!)

What makes a swale a swale rather than just a ditch is its positioning on the contour of the land.  To mark the contour, we made a simple lo-tech A-frame using deadwood from the site.  There are two different ways an A-frame can help identify the contour; either with a spirit level secured to the crossbar, or by a weight dangling and calibrated to the centre.  Then, marking the starting point (point A) with a stake, one leg of the frame is held at this point and the other rotated around until level ground is found (point B).  Point B is marked, becomes the starting point – the new Point A – and the process is continued. You can see a demonstration of how this all works here.

A-frame made from materials found on site 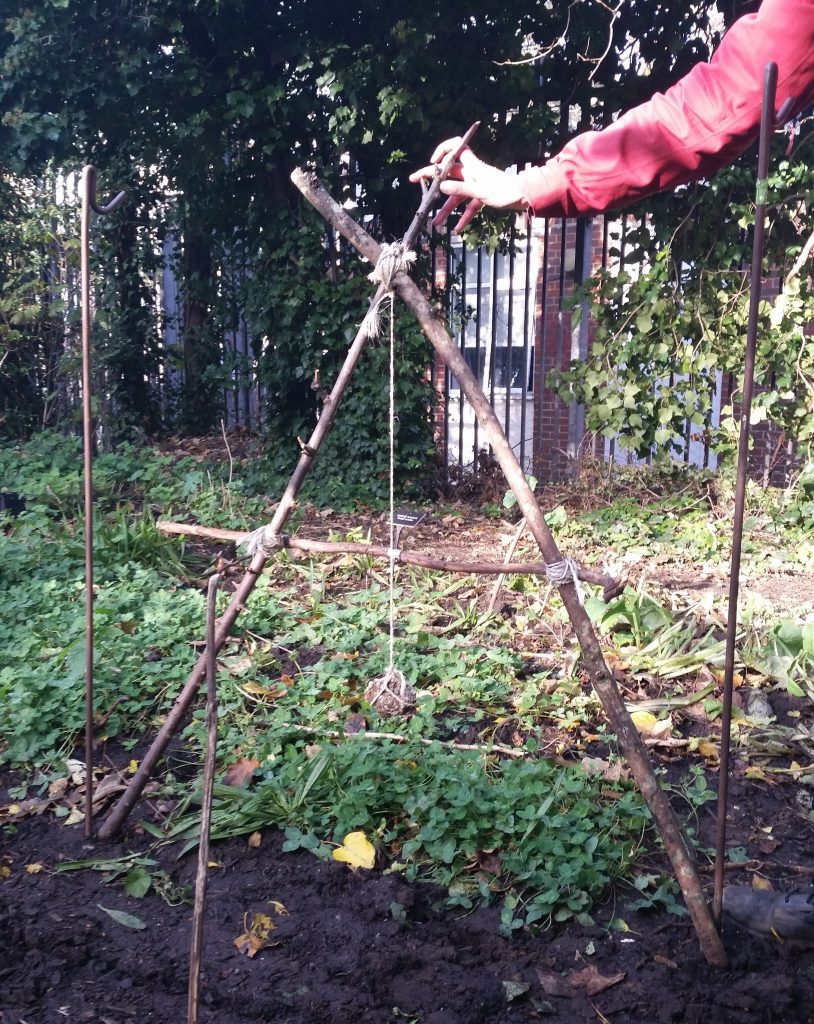 On a large scale, something more sophisticated can be used to save time, but at the small Phytology garden, this didn’t take very long.  After marking the contour where we wanted to have a swale, we began digging the trench.  Once the trench was dug, we checked the level at the bottom and shifted the soil as necessary to make sure it was level. The levelling transforms the trench into a swale.

One of our volunteers, Casey, used a wooden board and spirit level to shift soil around the bottom to make it level 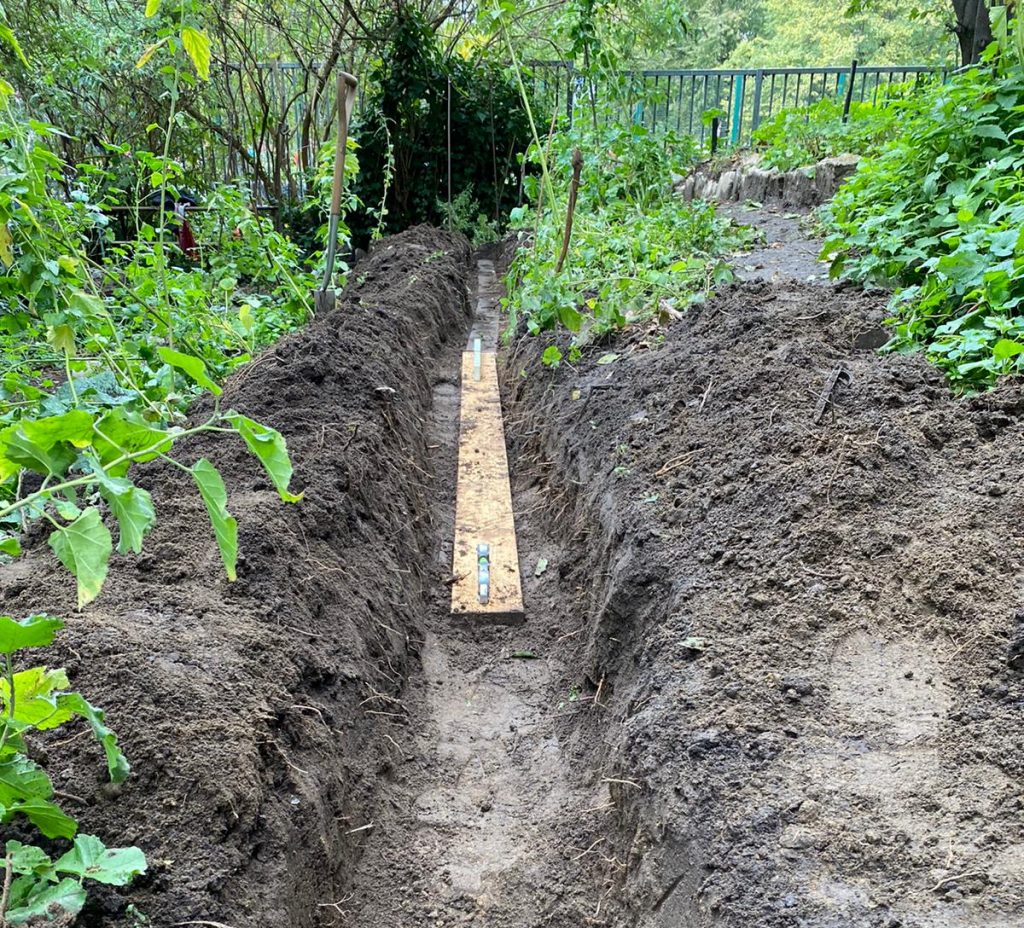 We have created two swales in the meadow and filled them with different matter.  We filled this part of the bigger swale with a mixture of woodchip, some of the soil that was removed, some compost generated from our community composting, and topped off with leaf mould from Victoria Park.  As fungus breaks down the woodchip, we hope that this will encourage greater fungal networks to spread into the soil over time, which will help with transport of water and nutrients. 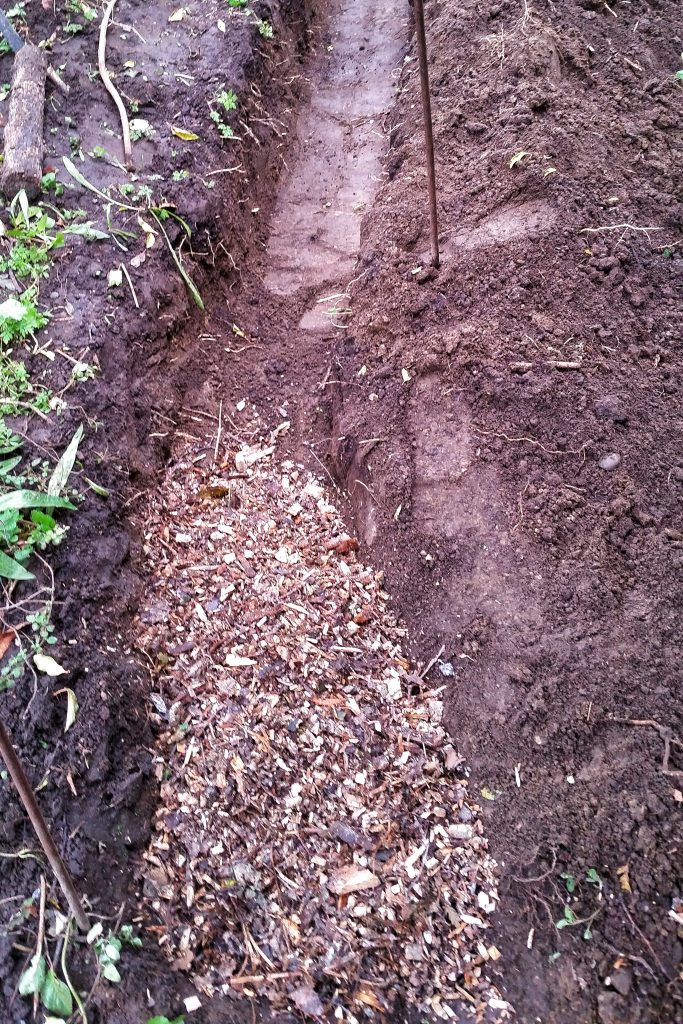 As an experiment, we planted up this part with species that prefer damp ground, such as Marshmallow, and others that can do well in damp ground, like Mallow. We may also add some others, such as Meadowsweet. 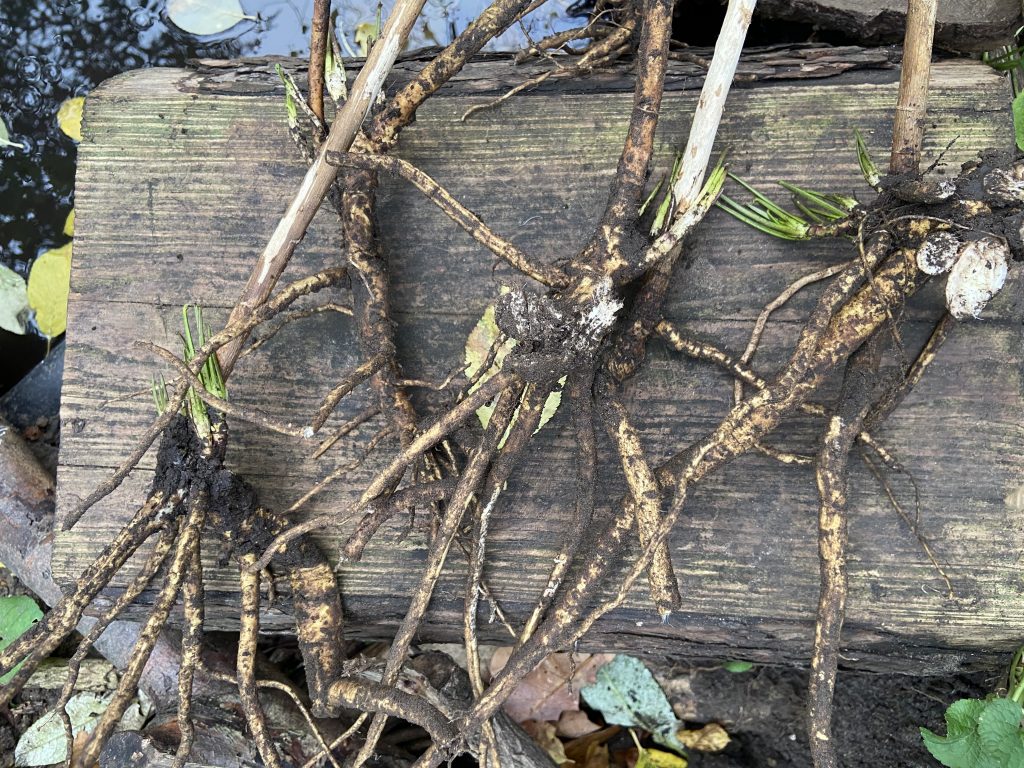 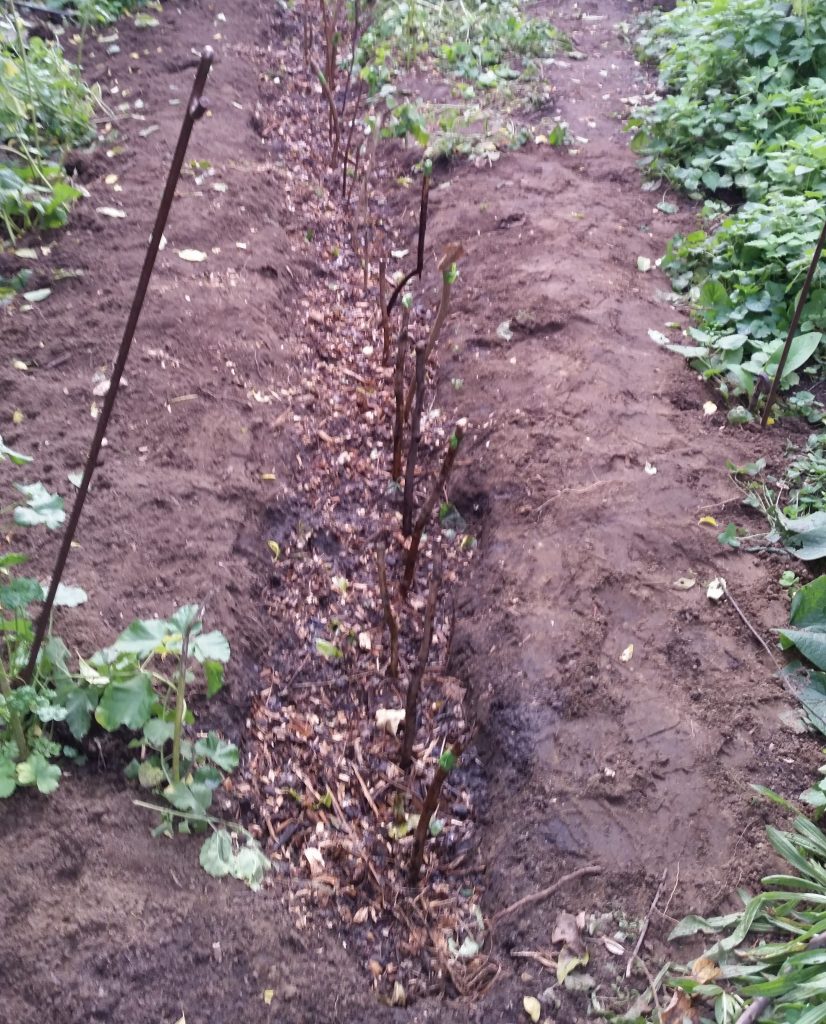 Ed, another volunteer, laying down leaf mold on the Marshmallow swale 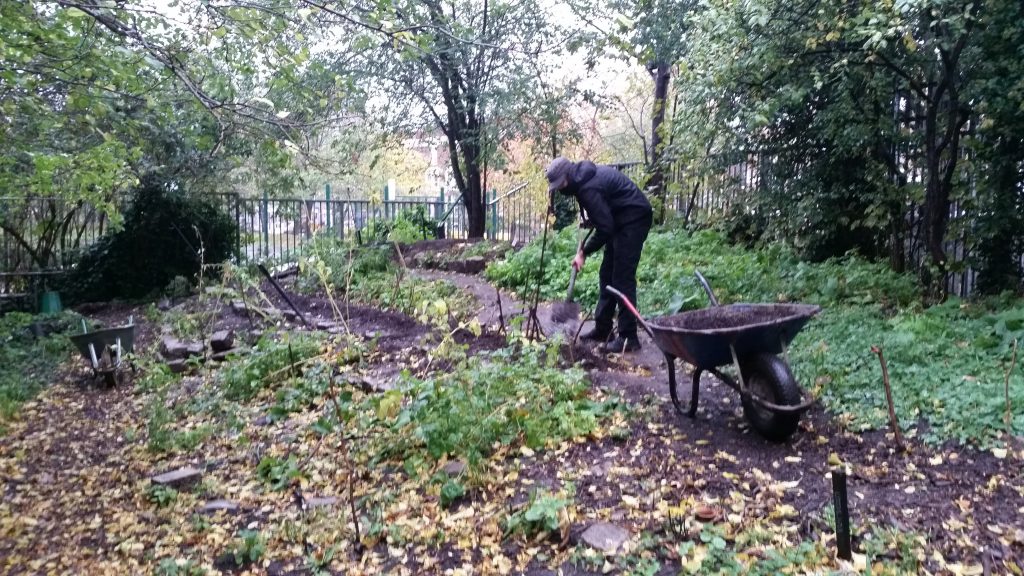 Shoring up the mound with stones salvaged from the local area 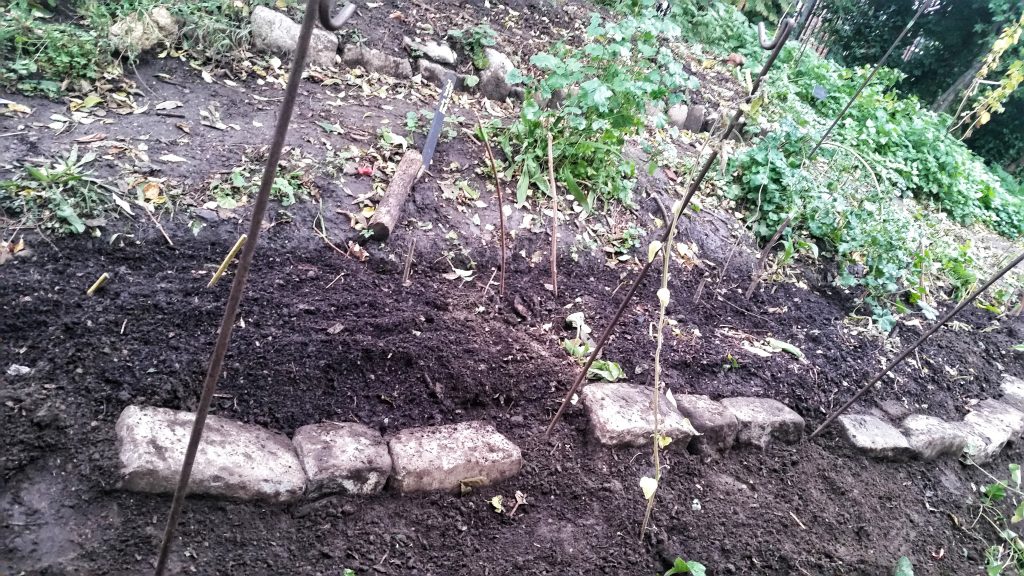 Before planting Comfrey into the mound beneath the Marshmallow swale, we poured some Nettle & Comfrey fertiliser into the planting holes 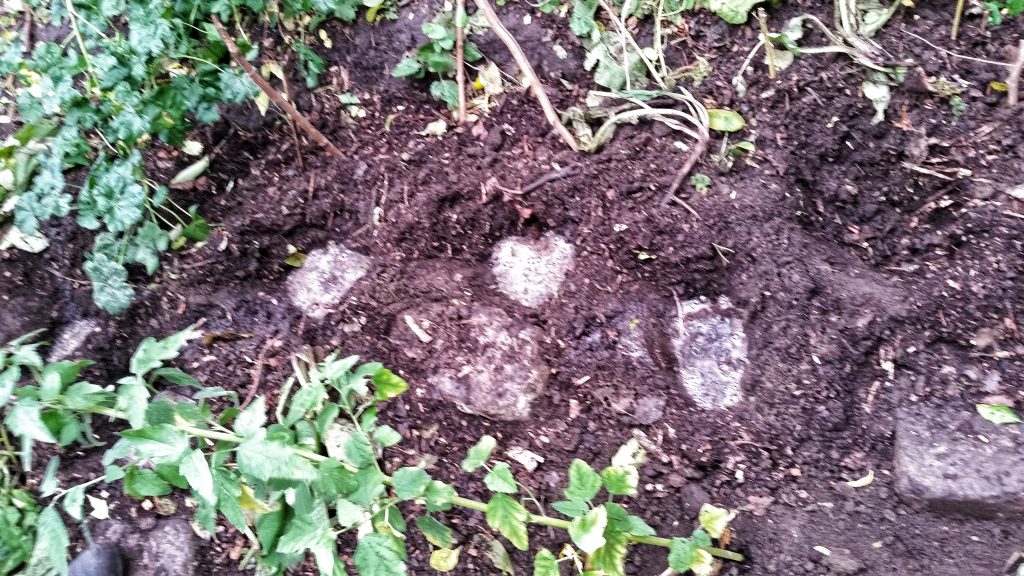 This swale actually extends and merges into the central path in the meadow, so from that point, we filled it with only woodchip to make it multifunctional – a water management tool, a path, and a soil life support via the fungal network that will emerge on the woodchip.  This is in line with another permaculture principle ‘each element serves multiple functions‘.  (There are actually many examples of this principle at the site – next time you visit, see how many you can find)