This is the first in a 3-part series of posts by Shumaisa about her experience with the meadow this year.

This year began with a frenzy of activity at the Phytology garden as we redesigned the meadow and began to plan for regular volunteer sessions from the spring after a year-long break in 2019.  We had also planned to work on strengthening the human  part of the wider ecosystem of the site.  The site rests on humans caring for it, and the site and its diverse life caring for humans; at this time, the human relational systems needed greater care and tending themselves.

Humans are a part of nature, but in focusing on care of the nature beyond us (plants, animals, fungi, earth, etc.) at the site, we can overlook the care of the range of people and people-care issues involved.  These are wide ranging and include accessibility to local residents; care of staff, volunteers, and trustees; and distribution of the labour involved – fundraising, admin, communication, logistics, etc.

February, though, triggers both a desire and a need to prep the garden, and as we had major work to do in the garden, we started there.  In recent years, with increasing spells of scorching heat punctuating what used to be mild summers, keeping the Phytology meadow hydrated has been a challenge.  It’s a beautiful challenge, in that it’s been met by a rota of committed and caring volunteers, self-organising watering of the meadow.  Nonetheless, it’s not very efficient to spray with a hose.

This year we received funding to set up a drip irrigation system linked to the neighbouring school’s water supply.  Drip irrigation is more efficient because the water drips directly into the soil resulting in less evaporation. This means the human effort otherwise expended in watering by hose can be employed for other tasks, such as harvesting or weeding.  In addition, we slightly deviated away from the focus on native and near-native species and added some Mediterranean plants – Lavender, Sage, Thyme, and Rosemary*.

As the summers become hotter and drier, it makes sense to adapt and plant these in appropriate locations within the garden.  Because they are more familiar to people, an additional benefit is that they can make the garden more inviting and accessible.  One of the main functions of this garden is serving as a resource for people to learn about medicinal plants and how to use them, and to harvest plants to support their health and wellbeing. 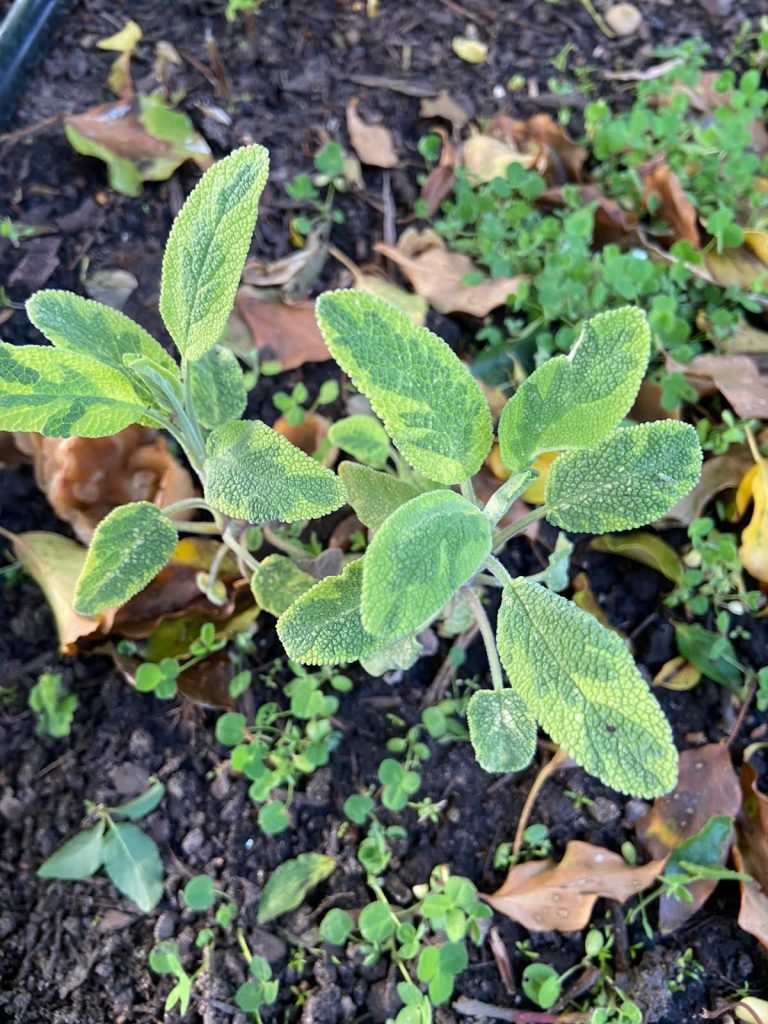 We also set up some terracing to hold up the soil on parts of the slope, put in some stepping stones, and intended to focus on supporting the soil’s microbial life, which would enable the meadow to better self-regulate hydration.  Sunlight and air have important roles in plant life, but all of their other needs are met through a vast network of subterranean microbial action.

Just as we ourselves are comprised of many unseen organisms, so is plant life – you may have heard that a teaspoon of soil contains more living organisms than there are humans on earth.  Amazingly, some commercial farms irrigate only a couple of times in the summer because their rich soil life takes care of hydration. That’s the kind of soil and meadow health we’re aspiring to!

Terracing with historical stones obtained from the local area 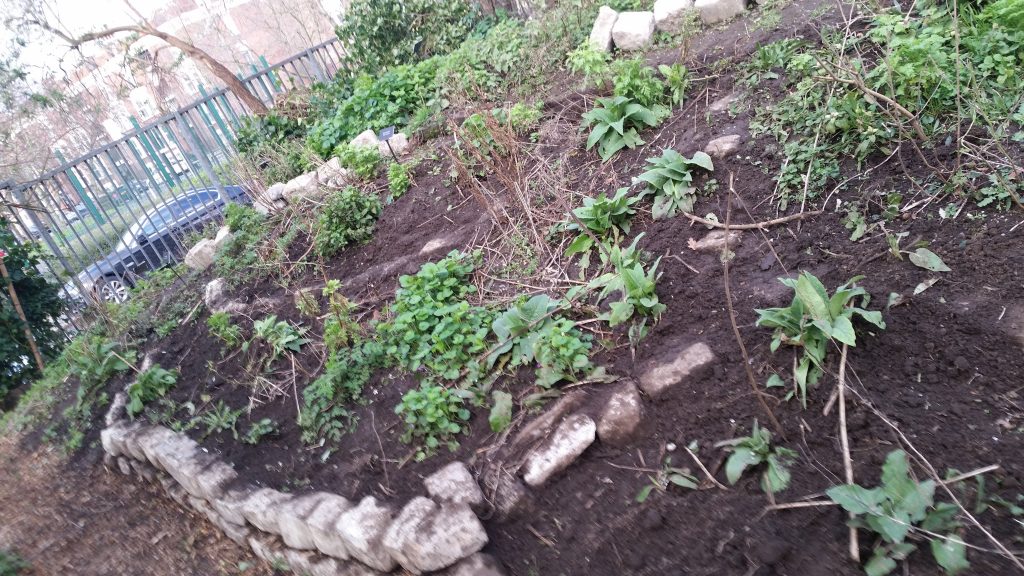 To create more space for meadow plants, we sheet mulched over some, but not all, patches of Nettle.  Sheet mulching involves covering over plants or grass with a thick layer of cardboard, or several layers of newspaper, and topping off with compost or soil.  Sheet mulch prevents light from reaching plants, which causes the plants do die back and nourish the soil – much better than digging up and disrupting soil life.

We then broadcast a mixture of seeds in this area, including of Red Clover. Red Clover has deep roots that improve soil structure and help prevent erosion, and it can also host nitrogen-fixing bacteria on its root nodules.  In exchange for energy and root nodule space to live, the bacteria converts nitrogen in the atmosphere, which is unusable to plants and animals (including us), into a form that can be used by plants – and to all those who consume plants.  Plants rely on carbon dioxide we and other animals exhale to combine with water in the presence of sunlight to generate food for themselves and us; we also rely on the oxygen they release, and the medicinal compounds they generate.  These are just some exchanges in a constant stream of reciprocity that animates life. 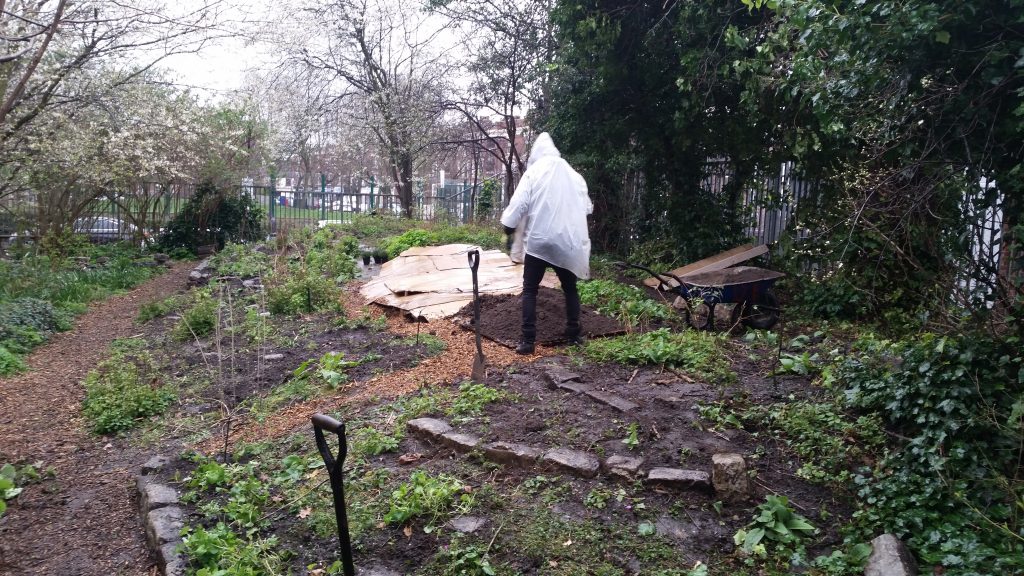 All this initial activity was in February and early March, and we soon realised that things would unfold differently.  We managed to set up the irrigation sometime in March before the COVID-19 lock-down, but other ambitions for soil care experimentation were put on hold. Navigating how to safely resume some activities while continuing to care for the site took up much of the capacity of main site caretakers.

On top of this, in July, the neighbouring school was flooded, so the water supply was shut down while repair works ensued.  Unfortunately, it took nearly two months to restore the water supply.  During this period, the garden team would use the method that had been used in Phytology’s early years – hooking up a hose to a tap at the housing estate across the road.  As this was only done once a week on work days, the meadow quickly dried up.  The school supplying water for the newly installed irrigation did not provide the resilience that could arise from addressing the hydration problem within the meadow itself.

This episode reminded us of the significance of the permaculture principle ‘use on-site resources‘.  Permaculture is a design approach centred on meeting human needs through applying principles and patterns observed in nature (which we are a part of).  It’s a mash-up of the works permanent and agriculture – the focus being on self- sustaining, generative systems (not just agricultural) based on beneficial, mutually supportive connections, rather than degenerative systems based on inputs from far flung places.

Also integral to permaculture is a set of ethics: caring for beyond-human nature; caring for all people – today’s and future generations; and being conscious about distribution of resources (taking no more than you need and sharing where possible).   And given the changing climate has already become evident in the eight years of the meadow’s existence, increasing the meadow’s ability to withstand the coming climate is crucial. 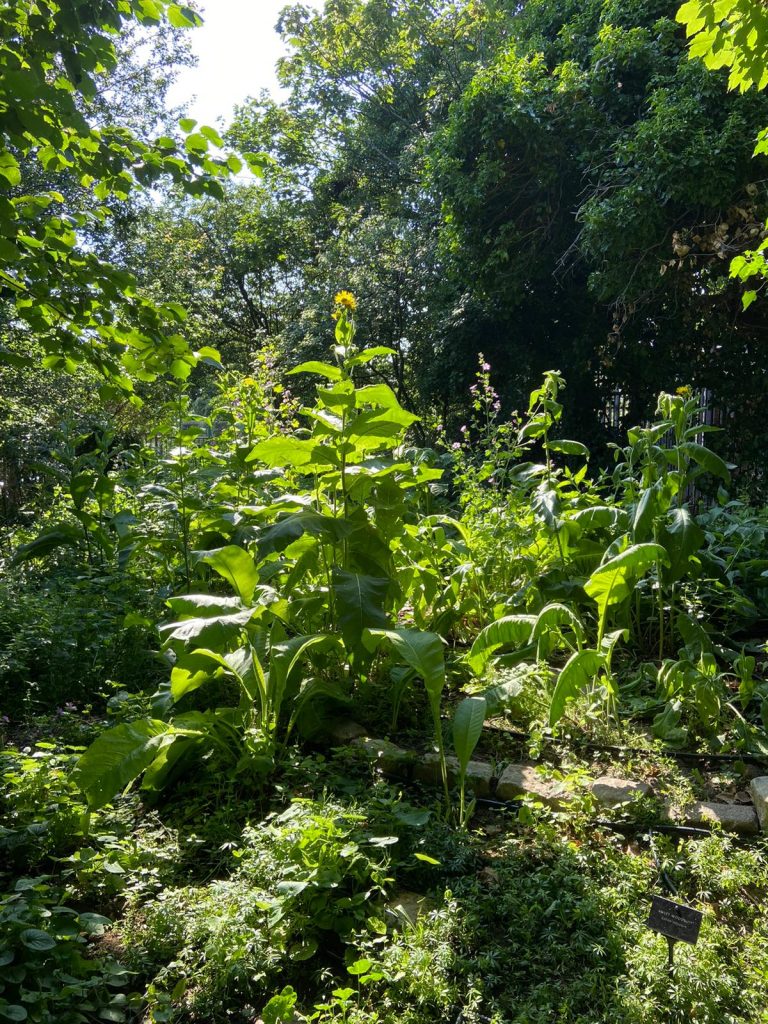 Scorched meadow and hardpan surface – even the weeds took a hit 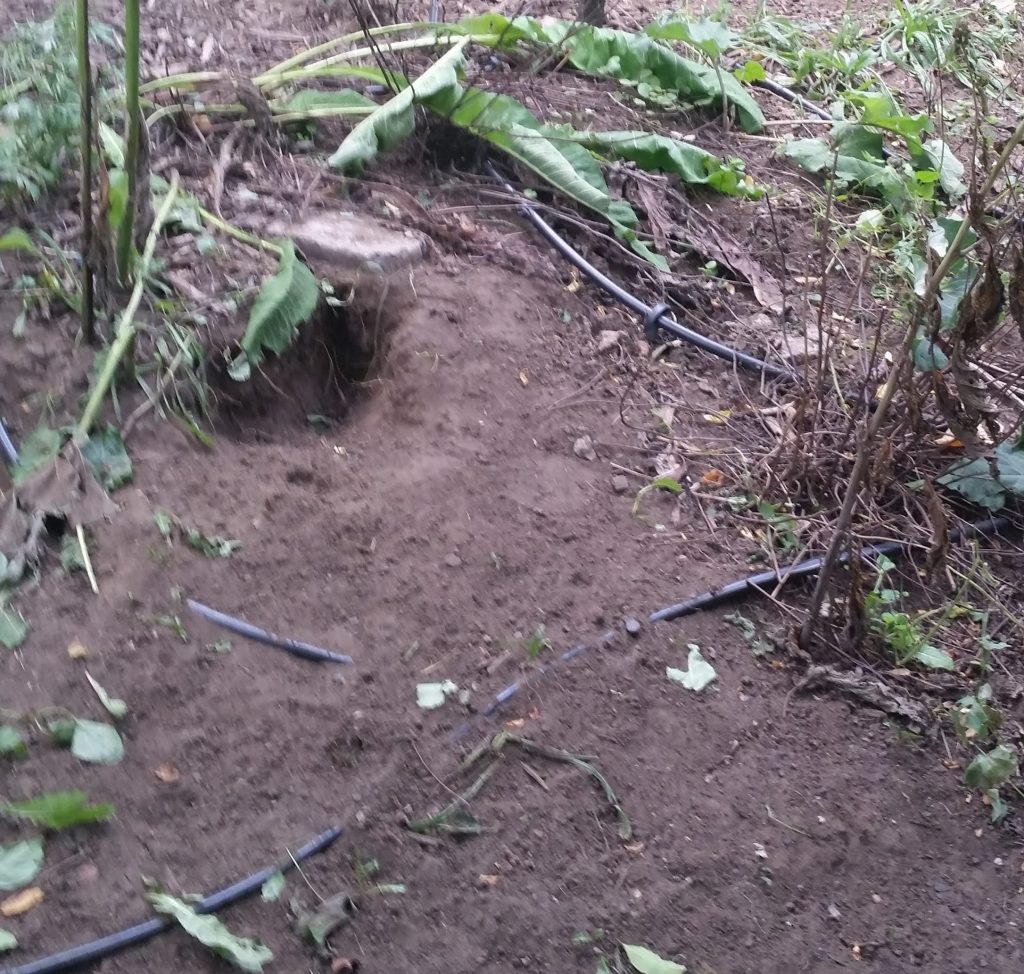 Some plants fared better than others during the dry spell.  We had a mixed experience with Red Clover – it quickly grew into the biggest red clover we had seen, and the other plants couldn’t compete – but it also didn’t flower. It’s the flower that is generally used medicinally, and perhaps it didn’t flower because of a deficiency in the soil, or inadequate light.  Even though the medicine garden is south-facing, and successfully grew flowering herbs such as Dandelion in its early years, the tree canopy growth over the years has increased shade.

Because we would like to grow more of some key plants of our garden next year, we will cover the Red Clover patch so that it dies back and releases nitrogen into the soil.  We’ll also add compost and have some tree pruning done to open up the canopy and allow more light in before broadcasting new seeds in the spring. 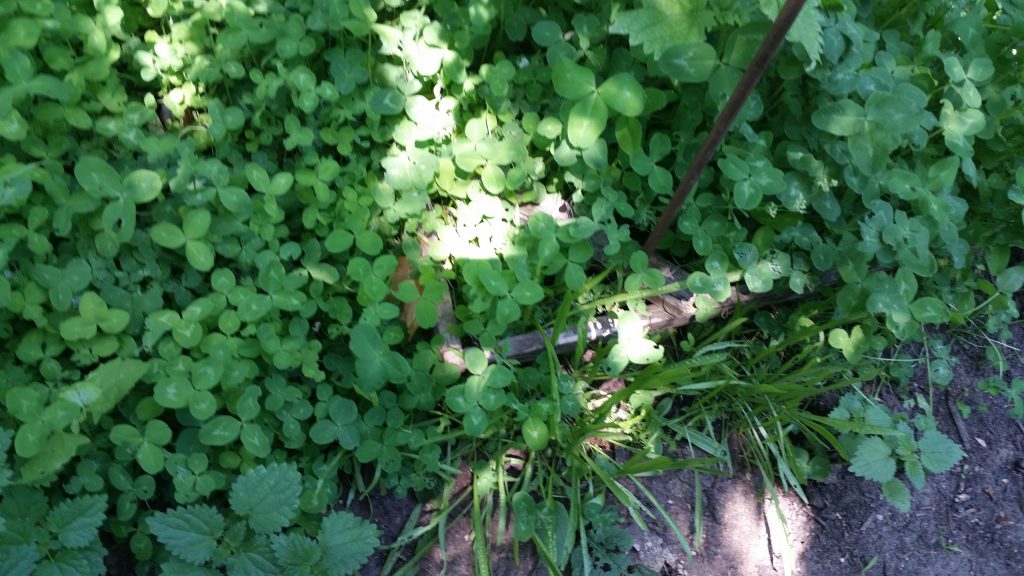 The people side of the ecosystem

Alongside of challenges in the meadow, concerns about accessibility to the diversity of local residents, and around decision-making and distribution of all the aforementioned labour involved in care of this complex site also demanded attention.  These were issues that were long being discussed, but the convergence of Black Lives Matter protests and a global pandemic brought them to the fore.  With less programming happening, we had more time to embark on a process of revisiting and updating the vision and purpose of the site.  Through this, a regular community forum emerged which currently meets once a month.

In addition, time and resources are being sought for strengthening the human ecosystem associated with the site.  All of this will help Bethnal Green Nature Reserve and Phytology become more resilient (If you’re in the area and want to get involved in shaping the future of the site and collectively sustaining the forum, you can contact info@nomad.org.uk).

In the process of the few forum gatherings that have taken place, we also learned that the story of the site is not fully known even by individuals long involved, so we need to develop channels for people to learn it, and update it as it evolves.  For example, not everyone knows that the Phytology and the Bethnal Green Nature Reserve collaboration was partly conceived as a creative way to resist development (of buildings) on the site.  [This story is captured well here.]

*Convention is to use capitalisation only for scientific names of plants, animals, etc, and not for their common names. I’m deliberately breaking from convention here in capitalising common plant names, because this is what people are most familiar with, and can help see them as something other than weeds.