Returning for a fourth summer filling London’s green spaces with music. A concert like no other: unamplified, outdoors, around a fire. Gather together and listen.

During the past decade Causley has been nominated no less than six times for a BBC Radio 2 Folk Award, last year he was nominated as “Singer of the Year” at the 2017 BBC Radio 2 Folk Awards, he won the Spiral Earth Singer of the Year award in 2014, presented his own folk music show on BBC Radio Devon and in 2015 he worked with BBC TV historian Dr Sam Willis to create the music for his show ‘Highwaymen, Outlaws and Villains’ and was asked to perform his song about Dartmoor tin mining ‘Pride of the Moor’ on BBC TV’s Countryfile – Dartmoor Special.

“The finest singer of his generation” Mojo Magazine

Cornish filmmaker Jane Darke made a specially commissioned biographical film about the life of Charles Causley this year (2017) which aired on BBC4 TV on 1st October as part of the Centenary celebrations. The soundtrack to the film was composed entirely by Jim and featured music from his 2013 album ‘Cyprus Well’. Since the release of his debut album in 2005, Causley’s unique voice and persona have helped him become one of the most well-loved and respected figures of today’s contemporary roots and folk scene.

A prolific collaborator, Causley is hugely admired for his work with iconic groups The Devil’s Interval and Mawkin:Causley as well as playing, touring and recording alongside Waterson:Carthy, John McCusker, Eddie Reader, Graham Coxson, Shirley Collins, Michael Morpurgo, Show of Hands, Kate Rusby, David Rotheray of Beautiful South fame and many more. He was described by Mojo Magazine as “the finest singer of his generation” and they put Forgotten Kingdom in their Top Ten Folk Albums of 2016 list. Westcountry father of folk Geoff Lakeman described Causley as possessing “A voice in a million” in a recent interview in the Western Morning News, some accolade indeed!

Saskia Maxwell is a singer, songwriter guitarist and flautist who hails from Cornwall in the UK. Whilst her 3 previous EPs have encompassed soulful jazz styles and exuberant folk songs, her more recent performances display a new found purpose and grace and are suggestive of a move towards a more otherworldly and ethereal folk style. Her new songs are explorative of many moods and perspectives that share a common purpose of being spiritually provocative and invigorating.

At just 21 Saskia has gigged extensively and has performed over 600 shows and festivals in the UK alone. She has supported the likes of Ralph McTell, Rae Morris, JP Cooper, Nick Harper and Rachel Sermanni. She intends to release her debut album in 2018.Born into a musical family, Saskia has always been surrounded by music and was classically trained on guitar, flute and piano from an early age. She is inspired by bands like Pentangle, Fairport Convention, Dead Can Dance and Cocteau Twins. 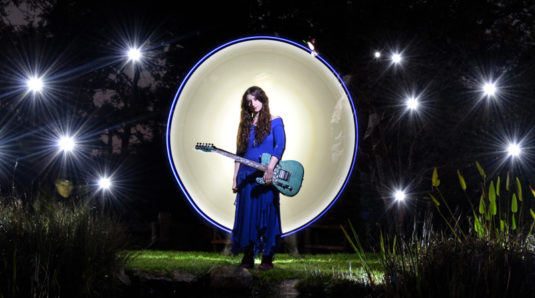